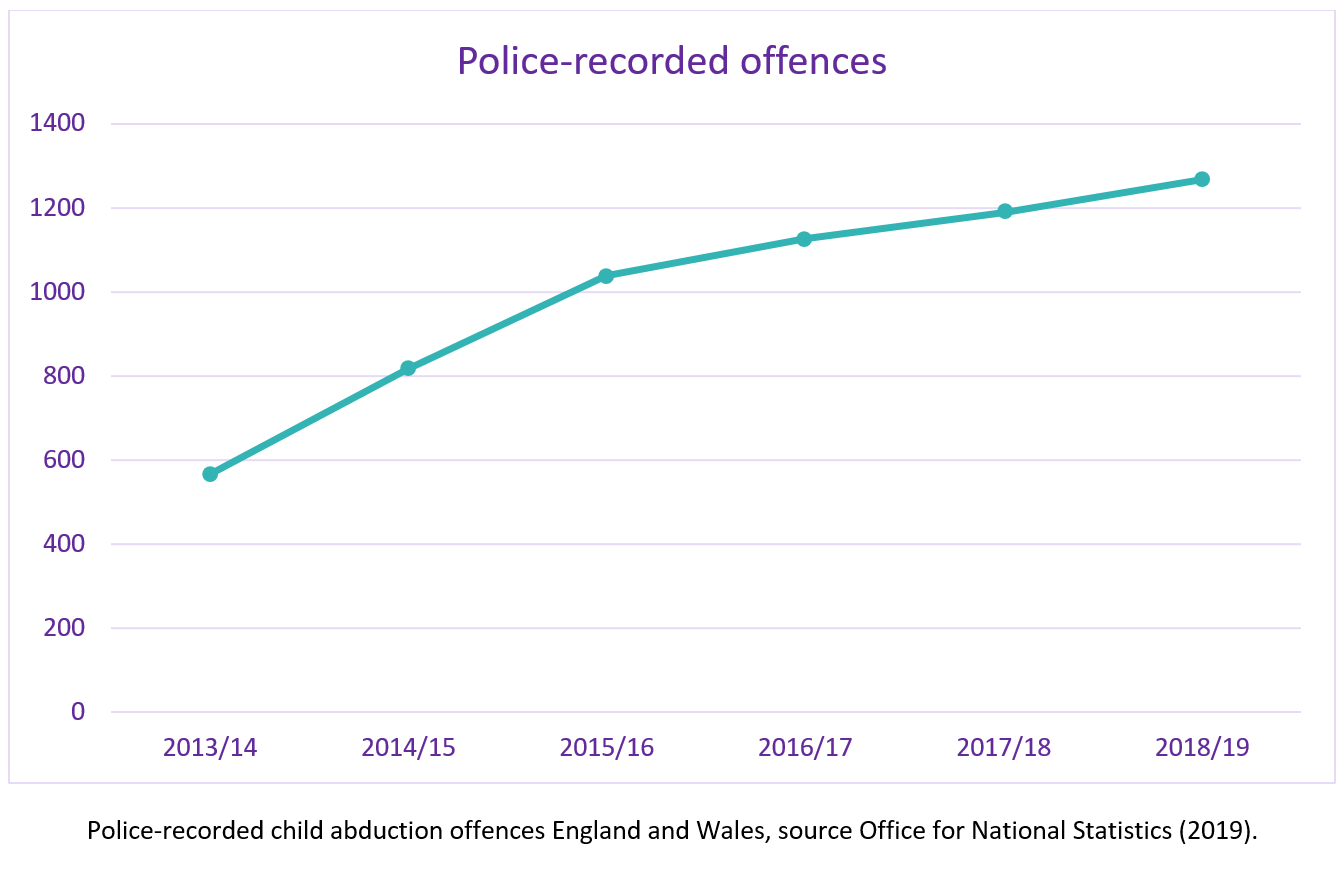 Today (16th August 2019) the charity Action Against Abduction is calling for an urgent review of child abduction offences, following the latest increases in crimes recorded.

Data released by the Office for National Statistics shows that:

Geoff Newiss, Director of Action Against Abduction, said “with offences of child abduction and kidnapping more than doubling over the last five years it’s imperative that we understand what is driving this trend. Is it police recording practices or has there been a real change in the risk posed to children?”
The charity is asking government to undertake a detailed analysis to examine if there has been any change in the types of offences recorded (e.g. parental, stranger etc.). The last in-depth review was conducted in 2011/12 (see notes).

In addition, the charity is asking the Department for Education to include child abduction on the list of safeguarding issues included in the annual guidance to schools (Keeping Children Safe in Education). The latest guidance contains advice to schools on abuse, bullying, child exploitation, drugs, female genital mutilation, forced marriage, radicalisation and online safety. Including child abduction alongside these issues would enable teachers to identify the right approach to talking to children about abduction and how to stay safe.

To date, more than 700 schools have signed up to the charity’s Clever Never Goes programme – the replacement for ‘stranger danger’. Newiss said “incidents of non-familial child abduction or attempted abduction are a daily occurrence in the UK and it’s vital that schools give children practical information that keeps them safe as they get older and become more independent. ‘Stranger danger’ is long past its sell-by-date and I’d ask all schools to look at the Clever Never Goes programme as a new way of broaching this subject.”

Further information on the latest ONS statistics on police-recorded child abduction and kidnapping offences, as well as the charity’s call-to-action can be found at www.actionagainstabduction.org/need-to-know.

2011/12 analysis of child abduction and kidnapping offences
The last in-depth review was conducted by Action Against Abduction in partnership with the National Crime Agency. Information was collected on 675 offences of child abduction and kidnapping (children only) recorded by 49 (of the then 52) police forces in 2011/12. The report found that:
• 43 per cent of offences were perpetrated by a stranger, the majority attempted abductions;
• 36 per cent of offences were perpetrated by someone known but not related to the victims, the majority arising from child sexual exploitation;
• 22 per cent were perpetrated by parents or other family members.

More details are available in the full report (‘Taken’ by Newiss and Traynor, 2013), see http://www.actionagainstabduction.org/?portfolio=taken-published-in-2013.

Clever Never Goes
Clever Never Goes was launched in summer 2018 after been piloted in seven schools, involving over 300 children of mixed ages and abilities. Measures of children’s ability to recognise an unsafe situation rose from 60 to 90 per cent after the first lesson. The pilot report is available at: http://clevernevergoes.org/why-clever/.

Schools across the UK can sign up to receive the Clever Never Goes resources at www.clevernevergoes.org. The Schools Pack consists of teacher’s guidance pack with two lesson plans and activities for Key Stage 1 and early Key Stage 2 children; a set of classroom slides; and a series of short ‘Go Spotting’ practice films. These films feature different interactions between children and adults (some safe and some un-safe) giving children chance to practice ‘Go Spotting’ (spotting when someone is asking a child to go with them), and teachers the chance to make sure their pupils have understood the Clever Never Goes message.
In addition, a Home Pack and ‘Go Spotting’ comic strips are available for parents and carers to talk to their children about the Clever Never Goes approach.

‘Stranger danger’
In 2014 Action Against Abduction published a review of ‘stranger danger’ highlighting the inherent difficulties with the approach; see: http://www.actionagainstabduction.org/?portfolio=beyond-stranger-danger-published-in-2014. The four main problems with ‘stranger danger’ are:

• Focusing attention on the threat from strangers can detract from the greater danger posed by someone known to children.
• Teaching children to be wary of strangers can inhibit them from seeking help if they are lost or in distress.
• Psychological studies have demonstrated that children of all ages struggle to distinguish a stranger from a non-stranger. Young children often think ‘nice-looking’ or ‘kind-sounding’ people are not strangers. Conversely, strangers are often perceived to all be ‘mean-looking’.
• Adults are often not consistent in applying rules not to talk to, or take things from, strangers.

Despite this, a report by the Children’s Commissioner in 2017, found that 90% of primary schools were still delivering ‘stranger danger’ classes; see Preventing Child Sexual Abuse: The Role of Schools (page 11).